I hope you are well and enjoyed the sunshine this weekend. Did you go outside for a walk or exercise?

It was nice speaking to some of you last week. I will be ringing again this week so if you see ‘No caller ID’ then it might be me. We have another great week of learning ahead and I look forward to seeing your wonderful work!

This week I would like you to do the following activities each day:

BBC Learning Programme provides more support to students and parents with a series of special daily broadcasts, so from Monday to Friday, you can watch Bitesize Daily on BBC Red Button from 9am to 11am, and again on BBC iPlayer.

Enjoy your week and learning of course  Make sure you share your wonderful work with me and the rest of Fir Class! Ask your parents to drop it off in the Home Learning Box next week when they pick up your home learning.

Vocab ninja – speculate – Use the link above to do the activity.

Lesson 1 – Plan a fight scene (this scene will be used in your mythical story). Now using the information provided write your fight scene. 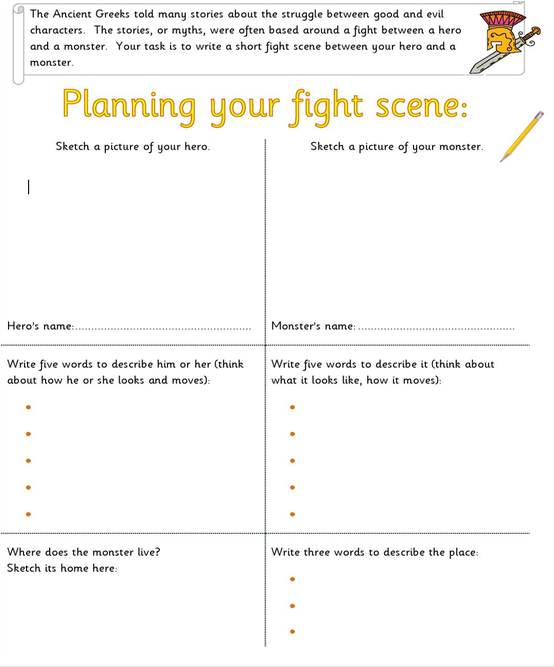 Vocab ninja – manoeuvre – Use the link above to do the activity.

In the faraway kingdom of Colchis lived a beautiful young princess called Medea. She possessed special magical powers, and could turn sticks into snakes and stones into bread. She could even walk on water. Now Colchis was a very small kingdom and life there was rather dull. So, Medea plotted how she could get away from her father, the king, and sail across the seas to a better life.

One day, Medea saw a strange ship sailing into the harbour. The captain was very handsome indeed, and quickly Medea drank a magic potion to make herself look even more beautiful.

The captain was Jason, prince of Greece. He had sailed his ship, the Argo, and led his brave soldiers, the Argonauts, through many dangers. They were in search of Colchis, the land of the Golden Fleece.

“Greetings!” Jason said to Medea. “We are here to find the fabulous treasure, the Golden Fleece. I must carry it back to Greece. Then my wicked uncle will give back the throne to my father, who is the rightful king.”

Princess Medea smiled up at him. She couldn’t believe her luck. Here was her chance to leave Colchis. There was just one problem.

“My father, the king, will never let you take the Golden Fleece away,” she told Jason. “He believes it brings us all good luck.”

Jason laughed. “We have been through a lot to get here. We are not leaving without the Golden Fleece.”

“Then you must let me help you,” whispered Medea, and she took Jason to see the king.

“Father,” she said. “These brave men have come in search of the Golden Fleece.”

The king didn’t look at all worried. Many brave men had come to take this treasure, but all had died trying.

“Very well,” said the king. “You can take the fleece. But first you must sow these seeds in the field behind my palace. Catch!” and he threw Jason a leather bag.

“Be careful,” Princess Medea warned Jason. “Those seeds are really dragon’s teeth. If anything comes out of the grounds when you plant them, throw a rock at it.”

Jason scooped the dragon’s teeth out of the bag and scattered them on the ground around the field. Suddenly, the ground started to shake. Skeleton hands reached out of the earth and, before long, Jason was surrounded by an army of evil looking soldiers. Medea shivered. She hadn’t expected so many skeletons. Would Jason survive?

The soldiers raised their swords, ready to attack. Jason was brave and held up his own sword. He fought well, but there were too many skeletons. He was surrounded. Then, remembering Medea’s warning, Jason ducked between the soldier’s legs and ran to the other side of the field. He picked up a huge boulder and threw it straight at them. The whole army scattered, and their bones fell to the ground.

The king frowned when he saw Jason back in the palace. He thought the skeleton soldiers would have killed him. Now he would have to let him try and get the fabulous Golden Fleece.

“You’re very brave, Jason!” whispered Medea. “But there’s worse to come. The Golden Fleece is guarded by a terrible serpent that never sleeps. It can only be tricked by magic.”

“Will you help me again?” Jason asked.

“Only if you promise to take me away with you to Greece,” said the princess.

“I’ll do anything you ask,” Jason promised.

Princess Medea passed him a special flower. “When the serpent attacks, hold this under his nose,” she said.

Jason tucked the flower gently behind his ear.

Medea watched as Jason and the Argonauts were led to a field. There, hanging from the branches of a tree, was the Golden Fleece, its wool shimmering in the sun.

“What an amazing site,” sighed Jason. But wrapped around the tree trunk was the giant serpent, its tongue flicking in and out of its mouth.

“No one can get past that monster,” said the Argonauts.

“I must try!” said Jason. He handed his sword to Medea and slowly walked across the field. Closer and closer to the serpent he crept. Just a few more steps and he would be within its deadly reach.

Then Jason stopped. Calmly, he took Medea’s special flower and waved it under the serpent’s nose. The monster breathed in its scent, and overcome by the flower’s magic, its head thudded to the ground and it began to snore. For the first time in its life, the serpent was asleep!

Carefully, Jason stepped over its scaly body and grabbed the Golden Fleece. The Argonauts cheered as he raced across the field with it. They all sped back to the harbour, Jason holding the fleece above his head.

The Argo set sail for Greece, carrying a very happy Jason with his fabulous treasure, the Golden Fleece, and an even happier Princess Medea.

Her father sent his ships after them, but clever Medea used her magic powers to whip up a fog and hide the Argo. At last, the powerful princess was free.

Activity: Using the above text, fill in the boxes below. Please write in full sentences. Use the text to unpick specific description used by the author. 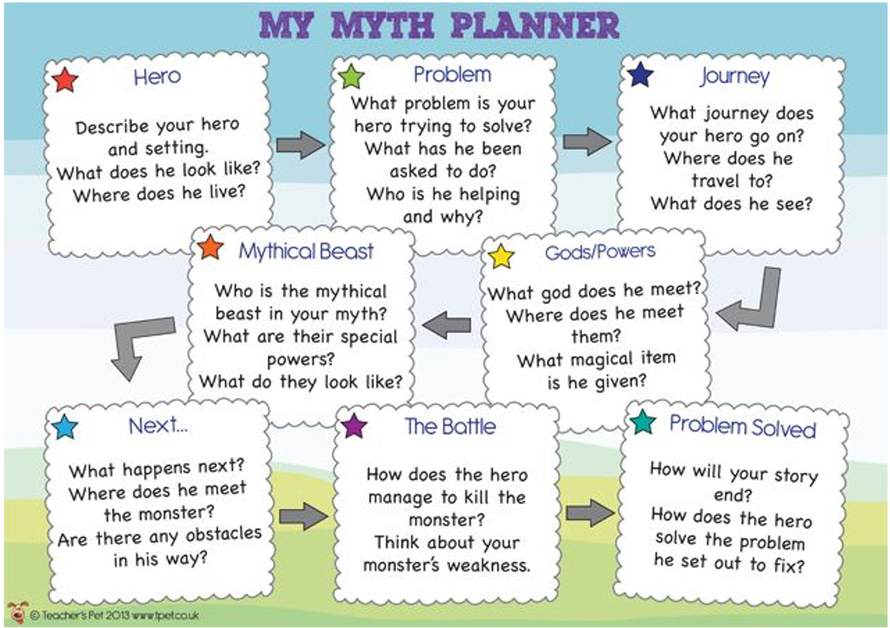 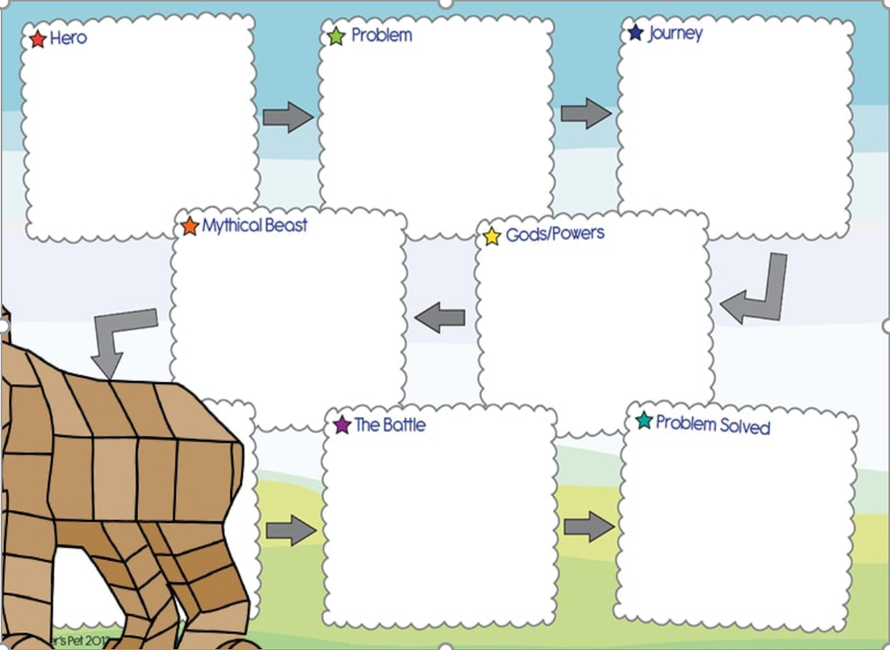 Vocab ninja – scrounge– Use the link above to do the activity.

Lesson 3 - Planning a mythical story - use the myth planner/and other work you have done over the past few weeks to plan out the beginning, build-up and quest.

Vocab ninja– spherical – Use the link above to do the activity.

Lesson 4 – Carry on with planning your mythical story. Complete; powers, next and mythical monsters. Remember to write in full sentences. Use the links on the learning page to access word banks and prompts to support your work. Vocab ninja – shortage – Use the link above to do the activity.

Lesson 5 – Carry on with planning your mythical story. Complete; conflict, resolution, feelings and show not tell. Remember to write in full sentences. Use the links on the learning page to access word banks and prompts to support your work.