Think about how Shackleton had to make the difficult decision- either staying at camp with little remaining supplies or heading for land in the boats at the sacrifice of killing the dogs. What would you do? Ask you parents and siblings

Can you create a table comprising of reasons for and against leaving Patience Camp.

Today, you are going to be writing an argument for whether or not to leave the camp.

You should be looking to include modal verbs 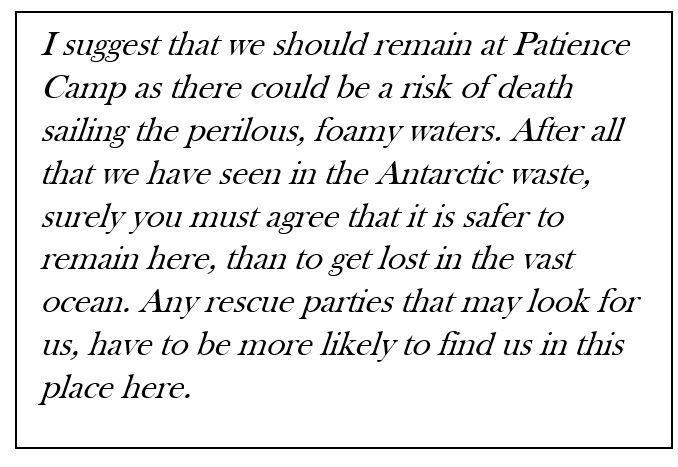 You are going to write a letter to Shackleton as a member of the crew, outlining your stance and whether you are for or against leaving camp. You can create a balanced argument could be explored here, taking into consideration both viewpoints. Opposing conjunctions will be used to present their argument e.g. but, however, despite, although, besides, yet.

What was Shackleton’s decision for leaving Elephant Island?

Do you think it was an easy decision only taking one boat, and leaving the rest of the men behind?

Can you think about the crew would say to each other when they were leaving? Talk it through with your parents and siblings. Take a photo of a frieze of the moment.

Remember the technique show not tell where the character shows the emotion through body language rather than explicitly saying it. Can you act out an emotion without saying how you are feeling? How could people tell what you are feeling? What clues in the body language gave it away? e.g. stretching and rubbing eyes- tired smiling face, eyes wide open- happy

Today you are going to write a dialogue between the two crew members.

Here is an example to get you started

“Goodbye. I’ll miss you!” McNeish spluttered trying to hold back the tears.